Last week we ran our first ever survey within the Members section of Cutepet.org. I wanted to gather some actual numbers for what Cutepet members prefer when it comes to the female form.

The survey concerned body proportion, an important indicator of physical maturity. In a nutshell, characters with a higher head-to-body ratio look more mature, and graceful. Characters with a lower head-to-body ratio look more youthful, and cute. For the survey, I created five nondescript bodies, whose proportions ranged from 7.5HH to 5HH. This is the middle range area that most figures fall into.

To better explain what I mean about proportions, I've prepared a sheet with some examples. I also defined the body proportions of the silhouettes used in the survey. In the Proportions survey, I didn't provide any formal numbers for the characters' proportions. Respondents simply rated the bodies on two unlabeled charts based on their gut feelings.

After a little over a week of polling, I took the data and gave each response a point value from 1-5, (5 points for most desirable, 1 point for undesirable) and set about scoring the silhouettes. 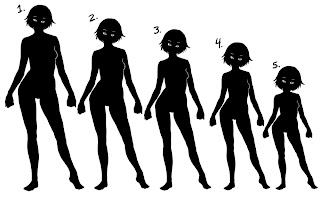 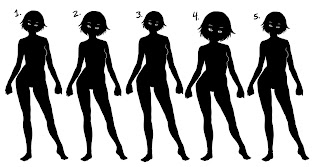 For the second set, I scaled all the silhouettes to the same size, but kept the head-to-body proportions the same. This way, the characters with smaller head-to-body ratios wouldn't look as childlike, and the characters with a larger head-to-body ratio would look a bit more youthful. Sure enough, the poll results showed a less dramatic point spread between silhouettes. Even the Adorable Mascot proportioned silhouette scored higher in the second set, though it was still at the bottom of the list.

On the second chart, the most desired body was the one with the youthful proportions, as opposed to the silhouette with womanly proportions, though the numbers were so close it was practically a draw (56-points youthful / 53-points womanly).

So, thank you to everyone who participated in the survey. This will definitely help inform how I create characters for the site.

And If you were wondering who the woman behind the silhouette was, well, it was no one in particular, just a quickie sketch I put together for the survey. Here she is, the mysterious young woman, known as Silhouette. :p

As for me, it's back to the drawing board.